A good win on a wet and windy day.

Heath Under 14’s travelled to Huddersfield YMCA for the 2016/17 season return fixture.

The home side were only able to field 11 players so relied on the Heath subs to make up a full team with the first half seeing Nathan Baldwyn, Robbie Abbott, and new recruits Dan Thomas and Lewis Dow helping out.

The hosts kicked off and Heath quickly worked their way up the field into the opposition 22 demonstrating excellent ball retention and handling in wet, windy conditions.  From a scrum Heath used the backs well for Centre Harry Stevens to cross in the corner to give Heath a 5-0 lead after 3 minutes.

Huddersfield kicked off and regained possession pushing into the visitors half until a knock on gave 1st Five Ben Gianotti the opportunity to use the wind to launch a massive clearance driving the home side back into their 22.   The Heath scrum was strong and a number of tightheads were won allowing Heath to pile on the pressure keeping the home side pinned in their own half for a prolonged period.  No 8 Toby Laurie then came up just short after breaking down the blind side from a scrum.

The pressure on the home team was eventually too much and Heath crossed the line three more times before the half time whistle courtesy of Hooker Jacob Minshall, Wing Seb Wood-Ives and Harry Stevens again, with halfback George Barton adding a conversion.

Half time saw Coach Jordan Bradbrook make changes to the Heath playing 15 with Robbie Abbott, Lewis Dow and Dan Thomas replacing Finlay Verry, Toby Laurie and Adam Ayub who went and helped out the home side.

The start of the second half saw Heath start as they finished the end of the first half with Jacob Minshall going over for his second try 6 minutes into the half, stretching the lead to 27-0.

From the kick off Huddersfields forwards began to gain momentum and the home side worked their way up the field into the Heath 22 courtesy of a series of penalties against the visitors.  Some good work from Heaths Nathan Baldwyn for the home side, especially with his tactical kicking from the base of the scrum pushed Huddersfiled into the visitors 22, eventually scoring next to the posts with the conversion leaving the score 27-7.

The Huddersfield forward pack started to gain the edge at scrum time but Heath continued to run the ball with Fullback Sam McIntyre making the most of a gap to go over halfway between the corner flag and left hand upright.  Conditions made goalkicking difficult and George Barton was unable to add to his conversion tally despite going close on most attempts.

The home side then crossed for two quick tries with Heaths Nathan Baldwyn capping of an excellent game at Halfback for the home side with a conversion, before seeing out the remainder of the match at Fullback for Heath, with Dillon Hilton going in the other direction.

Harry Stevens crossed again for his third of the match just before full time leading to a full time score of 37-19 to Heath.

Special mention to the Heath boys who helped out the home side ensuring a 15 v 15 match, and for giving a committed performance against their team mates.

Again, another committed performance from all in the squad, in their first season together. 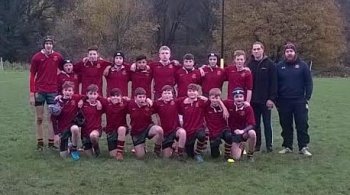