How did you manage to lose that one *

Heath gifted an early Christmas present to visitors West Leeds in this final Yorkshire 1 league encounter of 2016 at North Dean and were very disappointing in a game they should have won.

There was a couple of changes to the squad with Howard Hanks returning to the pack and Lewis Barrett was on the bench joining Olly Cook and Jordan Moana as Coach Dave Harrison looked to build on momentum from two wins from their last two games.

In perfect winter conditions second placed West Leeds kicked off and were immediately on the attack as Heath tried to settle into the game. The first real test in the game came after 8 minutes when a scrum saw the Heath pack overwhelm the West Leeds forwards and the referee had no option but to award a penalty to Heath and Ezra Hinchliffe converted to make the score 3-0.

This seemed to spur the visitors into action and with quick hands along the back line Stefan James went over in the corner for a try and he added the conversion for a 7-3 scoreline after 10 minutes.

The game ebbed and flowed with Heath adding a penalty courtesy of Hinchliffe again to reduce the arrears to 7-6 and keep Heath in touch. Heath were building some momentum and when Tom Baxter and Alex MCFadden worked the ball to Jack Sheldrake a break was on. James Robson then found touch on the visitors 22 with a clever kick before Matt Beasty had to leave the pitch with a shoulder injury and on came Olly Cook on 20 minutes.

The next period of play was scrappy with nemerous mistakes from both sides as they tested each other out but the Heath pack were dominant in this time and more should have been made of the advantage that Heath had. As half time approached players were throwing themselves into the tackles and from one onslaught West Leeds wing Jack Marshall popped up with an unconverted try for West Leeds to lead 12-6 and with Cook getting injured Beasty joined the fray and half time came.

Heath needed to re-group and on came Jordan Moana and Lewis Barrett to replace Ben Maxwell and James Robson. This meant that Ezra Hinchliffe moved to stand off with Barrett going to centre. This seemed to change the tactics of the game as Heath put in more kick and chase putting pressure on the West Leeds defence. When Heath were awarded a scrum 30 metres out from the visitors try line as had happened for most of the game Heath were in control and moving forwards before Moana picked up the ball and charged 20 metres to go over for a superb try on 53 minutes, converted by Hinchliffe, and Heath had regained the lead 13-12.

Heath were in control and although Hinchliffe was off target with a penalty attempt on 56 minutes he was on target with another penalty on 60 minutes to increase the lead to 16-12 and West Leeds were rattled and under the cosh. Next a probing kick from Jack Sheldrake saw the visiting full back exposed as Richard Brown, Jordan Bradbrook and Sheldrake pounced it was all Heath. West Leeds withstood the pressure and on 70 minutes, when they won a ball against the head in a scrum, up popped Stefan James again to score an unexpected try and the visitors led 19-16.

This was the knock-out blow to Heath and when James added an unconverted try with minutes remaining to put the score on 24-16 Heath had also lost any bonus point they should have earned.

So at the end of the year Heath lie in tenth position on 23 points and with a visit to Yarnbury, bottom of the pile on 19 points, on Januuary 7th and then a home game with Acklam, ninth on 21 points, it means the next two league games are vital and must win for the men from North Dean. 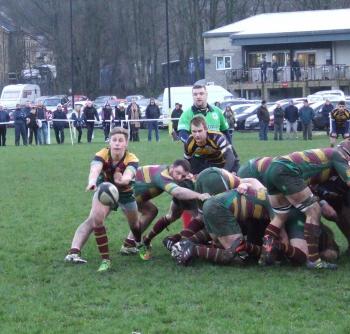 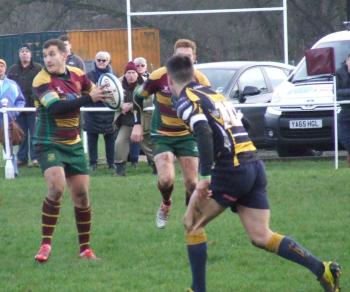 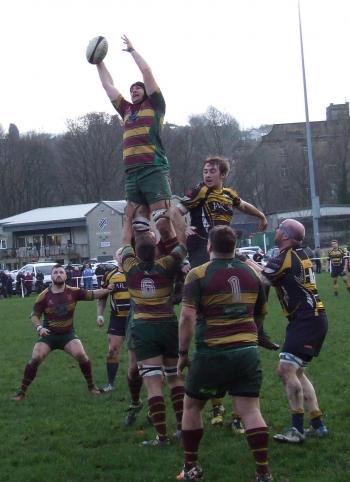 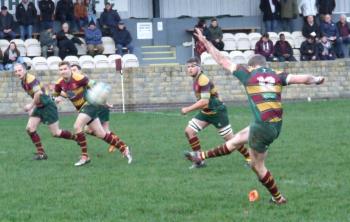 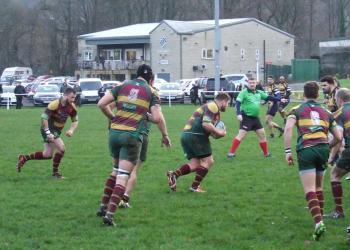 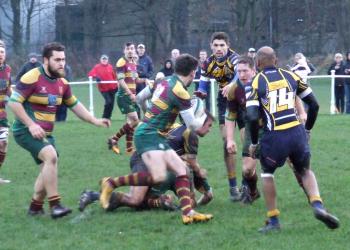 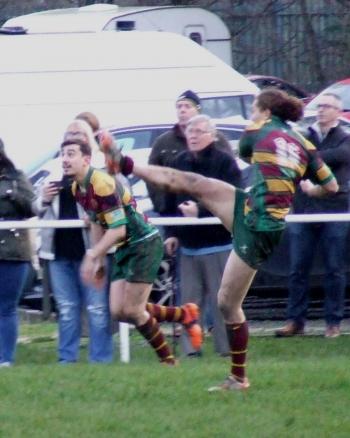