Heath 2nds made the short trip to Crocs on Saturday, in a hastily arranged friendly, after the league match against Cleckheaton was cancelled, due to the withdrawal of their team from all fixtures.

The weather, even before kick-off was poor, to say the least. A swirling wind and driving rain, was always going to make this a game for the purists, both on and off the pitch. That said, both teams did try and play expansive rugby outside of the front 8.

The 2nds, had the benefit of a couple of players, swapping between the firsts, and a bench of replacements, who would prove to be needed in this hard fought game.

Heath kicked off, and immediately put Crocs under pressure, the forwards won early turnover, and the ball was cleared by Crabtree forcing a 5 metre lineout. Crocs secured the ball and cleared to near the 22. Heath returned the ball, but the conditions led to it going to ground, the kick through from Cook went into touch. The resulting lineout was taken quickly, and allowed Crocs to kick clear, this was again well taken by Crabtree and another powerful kick put Crocs back on their 10 metre line.

The weather was worsening , and Heath were failing to take advantage of this early possession. Crocs were managing to clear any attacking play , and starting to come into the game themselves. Several times they had men overlapping on the outside, but strong tackling by Gleeson and Cook prevented offloads. Heath were largely dominating the scums, but, even though in retreat, Crocs scrum half managed to secure the ball and clear via his back line.

From one of these scrums , the opposition fly half managed to kick through and Cook manage to beat two opponents to touch down in goal, but was deemed to have knocked on in process. A 5 metre scrum was awarded to Crocs, and all too easily their scrum half managed to power over the line out wide, for an unconverted try.

From the restart, Crocs returned the ball for Jack Raby to catch and run forward into contact, supported by Kerr and Dawes, the ball was secured by Reynolds who released the backs, only for Webb to be unfortunate with a knock on. Wilkinson was replaced due to an ankle injury, by Szadby. Heath secured ball again from the breakdown, with Crabtree able to release Malik, with a reverse pass, who crossed for a try. This went unconverted again, in the swirling wind.

Crocs restart failed to clear the 10 m line and Heath took the scrum, the backs passed the ball wide but strong defensive tackle caused the ball to be knocked on. From the set play, the ball went to ground quickly and the impressive Dawes, managed to secure it from the mall, but the kick through went dead. A Crocs scrum was spoilt, allowing Reynolds to hack the ball through which was returned and Gleeson cleared into touch. Heath once again, showed powerful team work in the pack and the ball released to Gleeson and Webb, who exchanged passes out wide, allowing Webb to cross under the posts, providing a conversion at last.

The last 10 minutes of the half, became increasingly scrappy, with both teams exchanging knock-ons. Even well placed tackles were failing to come off, as the rain and mud made everyone slippery and distinguishing who was who, was becoming difficult. The conditions again took an injury toll with Gleeson departing and Berridge replacing him. Shortly after, the half time whistle was blown.

Crocs started the 2nd period strongly, soon after, forcing a 5 metre lineout which they turned over. Luckily they knocked on. From the scrum clearance, they forced another scrum, which they won and their fly half ran in out wide. The conversion was again missed.

Another injury exchange happened quickly, leading to a reshuffle in the forwards, Holdsworth went on wide for Barnes, K Raby joined in place of James to forge a father son partnership in the pack, Webb went into an unfamiliar role as No 8.

With Kerr lending his experience to the reshaped front 5, they manage to build dominance, and won a penalty from a scrum. Heath kicked though and Holdsworth manage to close down the full back. The ball went to ground and Dawes once again cleared out the ruck, forcing Crocs to concede a kickable penalty, for holding on. Crabtree made no mistake, giving Heath a 5 point margin.

Soon after Crocs knocked on from a clearance, and Heath secured the ball, a loose pass seemed to have ended the move, but Cook, seeing that he could not catch the ball, chose to volley it downfield, for the chasing J Raby, who collected it and ran in the try. The conversion was once again missed.

Conditions were now causing the officials concern , not only were the teams starting to merge into one colour (dark mud) but the conditions underfoot , led to concerns about further injuries , Heath already having seen 4.

The last play of the match proved to be a try, Webb managed to clear the ball through, but was pulled back by the collar 5 metres out, and a penalty try was awarded. The kick was taken and the Referee blew for time.

Heath take this excellent form through into next weeks home league game against Keighley. The forwards are improving week by week and the whole team are showing team commitment in training and also in withstanding early pressure and points deficits. Certainly towards the end of this match, the fitness levels of the team are proving pivotal. 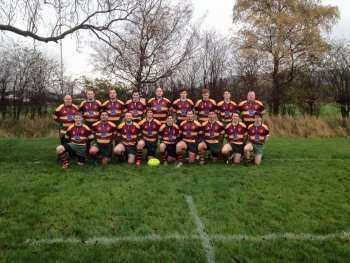