Middlesboroughs rugby began in 1872 when there were only about 50 other football clubs playing the oval-ball game. Their first international player, in 1963-64, was a product of Heath Grammar School, Phil Horrocks-Taylor.

Boro have made a good start in Yorkshire One  on the back of their experience in North One East. Nevertheless, Heath hoped to put a dent in this early-season form.

Boro showed one change to the side published (Moloney taking the place of Bellerby in the centre). Heath had their customary last-minute re-shuffle, with Will Sellars coming in to prop, Olly Cook dropping back to 2nd Row and Darren Neilly reverting to No. 8. Olly Collinge started at wing forward leaving Emlyn James, Kris Garland and Matt Cook on the bench. Fergus Marsden (2nd Row) and Sam Pollard (Centre) were back from university obligations.

Heath kicked off in glorious sunshine wearing unfamiliar green kit so as not to clash with the visitors claret and gold. Boro were quickly on the attack and their winger Rhys Kilbride might have got away had his kick through not just edged into touch. Boro continued to press forcing Eddie Cartwright to make the ball safe in Heaths in-goal area. A good re-start got Heath to the Boro 22m line and a penalty converted by Ezra Hinchliffe put the home side ahead: 3  0 after 6 mins.

Middlesboro hit back within 3 mins when centre Aeden Moloney scored a try near the posts which fullback Jack Bircham converted for the lead to change hands: 3  7 on 9 mins. A chip-and-chase by Cartwright took Heath to the Boro 22m line but play quickly returned to the Heath half through a towering kick from fly-half Simon OFarrell which was fumbled by Rob Thackray on Heaths 22m. Next, Hinchliffe kicked into the opposition 22m area where Heath were awarded two penalties  both of which they chose to kick into touch in the corner. Both sides fumbled possession and Heath missed a certain try when their centre passed several feet above Craig Heppenstall when the winger could have strolled in.

Boro tended to over-elaborate their passing and this worked to Heaths advantage. Several opportunities went begging when overlaps had been made and Heath fought back through Heppenstall and one searing run by Thackray which ended when he was brought to a halt just short of the try-line. A minute later, he had the ball knocked out of his hand going over the try-line on 29 mins. Cartwright found touch 10 metres out before Neilly made a splendid break, supported by Collinge, but the ball was lost. On 37 mins Boro had a penalty attempt but the shot went wide. Hinchliffe and Pollard broke through and a scrum followed on the 10m line as half time came.

This had been a pleasing half for Heath with the line-out functioning well and the team generally matching their opponents in most departments. The Heath forwards, spurred on by drives from Sellars, McFadden and Cook were particularly effective. That the team lacked the vital cutting edge was reflected in the score: 3  7.

The second half started with slick passing by the Heath backs but they were held, just short. They brought more pressure to keep Boro on the back foot. However, after a quickly-taken tap penalty by scrum-half Connor Foley, Middlesboro brought their big forwards into the game with a series of inside passes that tested the home defence. Only a penalty to Heath in front of their own posts relieved the pressure - but then the Boro fullback beat several defenders to set up a try-scoring position on 47 mins. Happily for Heath, he had put a foot in touch on the way. Two mins later weak tackling in midfield allowed the visitors powerful centre, Michael Thornburn, to score a try under the posts. Bircham made no mistake with the conversion: 3  14.

Heaths scrum half, Dominic Walsh, made a sparkling run which was stopped 10 metres from the Middlesboro line. Hamish Pratt took a quick tap penalty and Heath were held near the try-line but from a scrum on 54 mins Walsh pounced on a loose ball to score a try which was not converted: 8  14.

Some uninspiring rugby followed but then the always-illusive, threatening scrum half, Connor Foley scored an excellent try near the posts. It was not converted but Boro were ahead 8  19 on 61 mins. For the next 5 mins, ping-pong kicking and tit-for-tat breaks by both sides failed to lift the crowd but when Puttick was fouled on the ground a spark was lit! The crowd felt that Isa Warsama was lucky to be the only visiting forward red-carded and Heaths Si Brown was equally unlucky to be sent off after intervening to help break up the melee.

When play resumed, Heath won a lineout and Pollard set off on a run. Boro profited from a sliced clearance from Cartwright and developed a clear overlap but desperate defending by Heath prevailed, after which Walsh was sin-binned. OFarrell kicked another penalty for the visitors to complete the scoring: 8  22 on 75 mins. Emlyn James replaced Marsden in Heaths 2nd Row and the Boro 2nd Row, Euan Tremlett was yellow-carded.

Heath then camped on the opposition try-line and were eventually rewarded with a try from Neilly which Hinchliffe converted to secure a losing bonus-point: 15  22 on 77 mins. To the relief of one and all, the ball was booted over the stand to herald the final whistle. 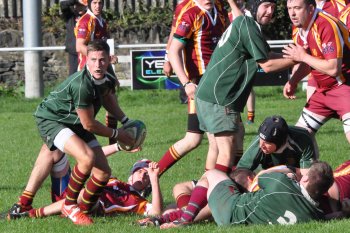 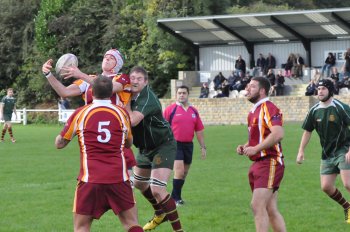 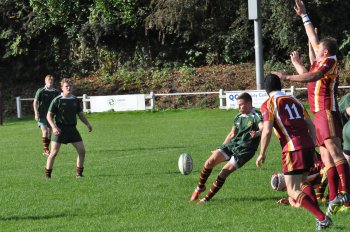 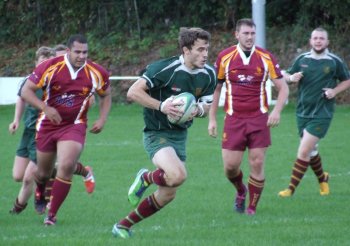 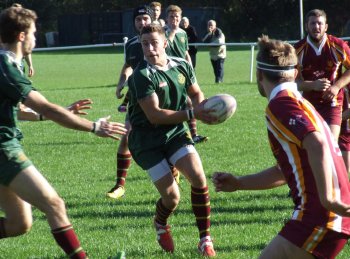 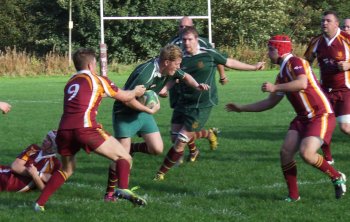