Prolonged absence from play made Heaths U16s all the more eager to capitalise on their last pre-floods match victory against top Yorkshire adversaries Beverley.

With local clubs Bradford and Bingley last minute decision to cancel the weekends fixture, Heaths Chair Paul Sutcliffes relentless desire to see his 16s side play saw him clinching the opportunity to play West Midlands side Barker Butts. Currently on tour, Barker Butts are a more than a capable side.

Welcome returns saw Heath fielding a near complete squad for the first time in several months. The first 10 minutes of play saw both sides evenly matched possession wise. On-form Hooker Matthew Wilkinson produced some excellent punching drives and was unlucky to be held up for what would have been the first try of the match. Instead, Barker Butts put the first points on the board.

And then everything clicked for Heath. Marked improvements in their play saw them producing some great flowing rugby all of which help create their second opportunity culminating in Heaths resident missile, Outside Centre Callum Harriott-Brown, touching down between the posts - two metres ahead of his nearest challenger. Man of the Match Fly Half Dom Ellam added the conversion and so it continued.

Heath Captain Jake Holmes added the next three tries with consummate ease, his agility, speed and ability to read the game proving infallible. Ellam added a further two conversion from these. Next, winger Jack Fox took a well earned try, the last points before the whistle blew on half-time with Heath in a health 31- 5 lead.

Repeating his first-half form, Harriott-Brown took the first try of the second with Ellam again converted in his pin-point accuracy. Will Rocky Bennetts efforts were rewarded with a well earned try successfully kicked by Ellam moments before crossed for his own converted try. Not content with one try he then added the final points of the match with another leaving his side in an unchallenged 55-5 lead.

Notable performances from forwards award winner Flanker Max Netherwood, Matthew Wilkinson for his steely determination and punching drives and Second Rowers Max Dawes ,who impressed in the ruck, and stalwart defence from Ben Choy. Credit also to recent returnees Edward Black and Oliver Tandy, both returning after prolonged back injuries. Every improving, the U16s are, to date, Heaths most successful side of the season. 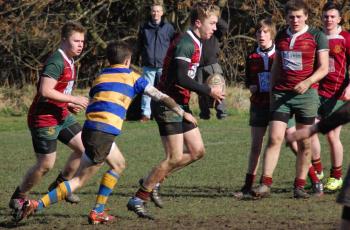