Heath faced visitors Beverley with some trepidation. However, they were able to field a near complete squad first the first time since October  and it showed.

In less than perfect conditions, both sides displayed good gamesmanship knuckling down to the job in hand on a pitch gradually changing from green to brown. From the off, both sides appeared equally matched each with quick, agile backs but more importantly, in these adverse conditions, hard working forwards. Aided by recent returnee Jack Raby Heath made Beverleys job all the harder in the power sapping conditions, particularly in scrums.

Centres Callum Harriott-Brown and particularly Jake Holmes kept the pressure on the vistors. Good drives from Sam Dews, Man of the Match Harry Hollingsworth, Ryley Cowgill together with Will Bennett, Matthew Wilkinson and Jacks Fox and Raby all helped too. However, Beverley were the first to make the break though, despite being caught a good metre short of the line their scorer managed to keep the momentum up crossing for an unconverted try in the corner for the only points in the first half.

Dom Ellams return from injury proved worrying short, a broken finger sidelining him from the match. Despite this Heath never lost faith and so the match continued with both sides sharing equal time with the ball.

In almost predictable fashion, Harriott-Brown finally made one of his trademark breaks taking an unchallenged run to the line, touching down by the posts. Holmes tipped the balance though, with a pin neat conversion adding the winning points.

Heath took the win 7-5 but credit to each and every player for playing such a well disciplined game in terrible conditions. One of, if not THE, best match Heath have played so far this season. 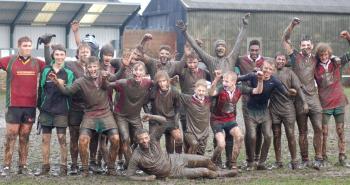