Heath Under 16s continue to re-write the form book.

Heath Under 16s were away to Castleford and riding high on the back of four high-scoring back-to-back triumphs, Heath could be forgiven for falling into a false sense of security - despite last seasons fixture resulting in a Castleford victory.

Heath kicked off the match. And so started 20 plus minutes of yo-yoing possession. Still wary of their former victors, Heath seemed unable to capitalise on opportunities. Full credit to full-back Tom Berridge who positioned himself perfectly before he received a total four Castleford kicks, all of which he drove forward well into their half. Unfortunately, poor ball handling (not helped by deceptively slippery conditions) and the inability to tackle some strong opponents below the waistline, prevented Heath from racking up points.

The points did come though. Clearing the ball from his own 5 metre line, inside centre Jake Holmes kicked bounced straight in front of two Castleford players who, unfortunately for them, hadnt accounted for Callum Harriott-Browns speed and agility. Harriott- Brown caught the ball on its first bounce and sped unchallenged to the first try of the match touching down under the sticks. A pin-neat conversion from Dom Ellam sealed the 0-7 lead. It took a while, but Castleford did draw level five minutes ahead of the half-time whistle following a rather scruffy scuffle for a loose ball.

Second half continued in much the same vein, as Heath continually failed to deliver on some excellent game play. Firm tackling from flanker Max Netherwood continued to wrangle with both his opponents and, it would appear, the referee. Final straw came when a bone crunching tackle resulted in a questionable penalty for tipping. Castlefords successful kick gave them a 10-7 advantage. However, Heath kept challenging and soon drew level after a successful penalty kick from Ellam.

Heath kept up the pressure on their tiring opponents spending the majority of the remaining minutes camped in their Castlefords half. Winning try came from the ever improving winger Matt Walker. Heath newcomer Walker positioned himself perfectly to receive a well placed pass from second rower Will Bennett for an unchallenged drive to the line, Castlefords defence only catching him just as he placed the ball over the line. This, together with his proven ability to listen and learn, earned him not only his team mates respect but the coachs man of the match award.

Notable performances from Arron Kelly, Harry Hollinsworth, Ryley Cowgill, Ben Chow and Max Dawes in defence and both Ben Sykes and Sam Dews in the line-out. 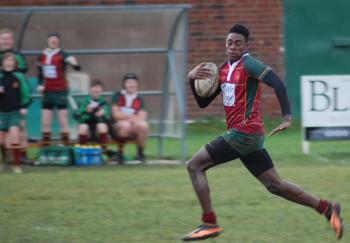