With three county players a piece and no other yardstick(s) available, Heath and Hull U16s inaugural match had pundits wondering just what the final outcome might be.

Uncertain as to whether they could take their fourth win in a row, Heath reverted to recent form pushing hard from the off. The Halifax side soon found themselves camped in Hulls half and, within five minutes, Heaths ever present prop Ryley Cowgill powered his way over the try line. And so the scene was set.

Just shy of the tenth minute, scrum half Sam Sharp cleared the ball through number eight , Will Bennett, to Liam Sykes who crossed a metre off the corner post. Dom Ellam converted.

Matthew Wilkinson was unfortunate not to be awarded a try after a great piece of footwork saw him pierce Hulls defence only to be held up just short of the line.

Another successful scrum clearance saw the ball pass down the line in quick succession with full-back Tom Berridge taking the honours as he crossed for the home sides third try.

Hulls pacy winger, Joe Garwell finally broke through Heaths defence, outrunning Heaths Callum Harriott-Brown as the East Yorkshire player ran the ball in from his own 22 metre line taking their only (converted) try of the game.

Heaths Jake Holmes took the next two tries in trade-mark still touching both down between the sticks, with Ellam converting the first. Will Bennett took a well-earned try next which Ellam converted before he too crossed under the posts leaving the half-time score at 43-7.

Man of the match Cowgill opened the second-half points tally breaking clear just in front of the 22 metre line. Heaths score rate slowed but didnt halt. Harry Hollingworth crossed but was declared to be held up. A further try for Ellam followed by Cowgill taking his hattrick before Berridge took the final try all played a part in this convincing 65-7 win.

Notable performances came from Sam Dews, who played an important part in Heaths much improved line-out, fine defending from, amongst others, Ben Choy and Max Netherwood who made the tackle of the match against Hulls number eight and Will Bennett whose rucking skills continue to impress. 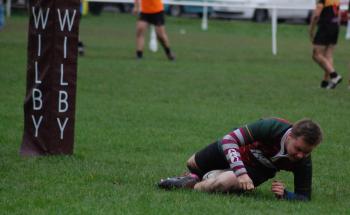