Another good away win!

Heaths Under 16s hoped to maintain their recent run of success away to Bradford and Bingley (Bees). With Bees reduced to just 13, Heath players helped balance the numbers, Will Norcliffe and Matt Walker donning Bees tops for the first half.

Heath set a precedent from the off with the majority of the first fifteen minutes played in Bees half. Within the first five minutes of the match, blindside flanker Ben Sykes took the first points of the game displaying some great footwork as he second guessed his way to the line. Dom Ellam added the conversion.

Strong drives from Ryley Cowgill, Dom Ellam and Jake Holmes kept the pressure on Bees, but Sam Dews created the next opportunity pushing hard into Bees defence before off-loading through Oliver Tandy to man of the moment Jack Fox. Foxs sidestep resulted in a Bees pileup as their numbers 9 and 14 collided leaving Fox with a clear run to line.

Heaths defence proved impenetrable with Bees being unable to make much progress outside of their own half. Callum Harriott-Brown seized his chance for the first of his tries. As is so often the case, once he found a space the points were there for taking with Bees defence just unable to match his speed. His second try followed moments afterwards with Ellam converting both.

With half-time approaching, Man of the match Ellam seized the chance to add a drop-kick to his tally Leaving his side with an unchallenged lead of 34 points.

An on-form Sam Sharp took full advantage of a late passed ball just four metres shy of the line and managed to create his own space before crossing under the posts. Just to seal the deal, he then converted his own try.

Taking his hatrick, Harriottt-Brown scored with what appeared to be consummate ease while Ellam scored his final conversion.

Bees then had brief flurry of enthusiasm , running the ball in well to take their first try. Holmes interrupted their flow taking an unconverted try but, credit to them, they responded quickly with a second try. Following yet another pacy run from Holmes, Matt Walker took receipt of the ball for a well deserved try the last points just ahead of the final whistle which sealed a 58-12 win. 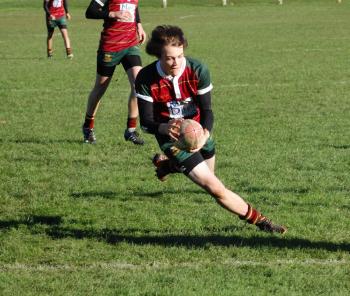