Reported by Garf'
<< BACK
FINAL SCORE: Barnsley 20 vs Heath RUFC 20

Dom scores last try for a hatrick and a draw.

Heath travelled to South Yorkshire, hoping to get their season back on track and finally drag themselves away from any possible relegation zone. The afternoons hosts, Barnsley, were anchored firmly at the bottom of the league table but had managed to recruit five new players, prior to the RFU signing-on deadline in the week. These were the experienced backs Mike Hayward and Craig Jeffels who arrived hot on the heels of Proctor, Nesbitt and journeyman Chris Willett  the last of whom appeared in Heath colours, briefly, last season. Former Heath scrumhalf, Neil Francis, still featured in the Barnsley line up and was one of their more effective players.

Earlier in the week, Heaths Coach, Kevin Plant, had elected to field some of the Clubs promising Colts  Sam Pollard, Ezra Hinchliffe, Jack Sheldrake, Kofi Brobbey and Peter Birkett. All of whom made an impressive impact during the game.

The hosts kicked off and Ian Downsborough collected. After a couple phases came the first scrum, where the Heath boys set their mark and in which they would totally dominate all afternoon. The ball was quickly moved down the line, where Sheldrake fed Pollard who made ground before chipping over the remaining defenders, only to see his chase thwarted by the dead ball line. The band of travelling supporters looked to this as a sign of things to come, but were only partially rewarded in this regard.

Not long after, came a heel against the head for the Heath pack and more pressure produced a first penalty for the afternoon  just put wide by Hinchliffe. The hosts then made their way to Heaths 22 for the first time and, moving the ball from side to side of the pitch, new boy Hayward scored over in the corner, for the first of his afternoons tries. The conversion was missed by Jensen.

Somewhat against the run of play, Barnsley were 5  0 infront but had shown they were capable of playing basic rugby, creating the opportunities, then coming away with points. On twenty minutes, Barnsley were defending from a scrum in their 22, when their forwards broke out, creating space through poor Heath tackling in the inside backs. The ball went down the line to speedy winger Taylor, who scored an unconverted try outwide, for a 10  0 lead. Heath needed to regroup and stop the encounter drifting away from them.

On the half hour, Heath were still dominant in the forwards but looking to make a breakthrough in the backs. A well taken line saw hooker Mark Puttick rampage up the centre. When stopped, he layed off to the supporting Hetherington, who got the backs into their stride with winger Dom Walsh sprinting for a well taken try, in the corner. This was well converted by Hinchliffe for Heath to come back into the game at 10  7.

As Heath worked for another score before the break a good drive from prop Watson had Barnsley penalised in defence  Hinchliffe stepping up to take the 3 points on offer and moving the score on to 10 a piece. Some slack play and dropped ball on Heaths part then saw the hosts given a possible opportunity for points, but the visitors defended well  Puttick chasing back to drop on the ball, over the line, saving a score in the process.

Coach Plant rang the changes at various points in the second half  the first being a brief foray onto the field by Brobbey, as a blood replacement for winger Si Brown.

The first score of the period went to Hayward, for Barnsley, who appeared at the end of a well worked overlap. This time Jensen converted to move the score onto 17  10. Heath then made several attacking breaks, the best of which saw Brown just tackled into touch as the line beckoned. Further forays were hampered by a few basic handling errors. Something that began to feature for both sides as the half progressed.

After twenty five minutes in the half, Heaths continued pressure produced a good break and the ball was worked back and forth down the line to find Dom Walsh on hand to add the final polish and go over in the corner. Kicking into the sun, the conversion was narrowly missed, but Heath were back in contention at 17  15.

Next, replacement Jamie Richardson was unluckily caught offside but the Barnsley kick failed to produce 3 points. A few minutes later and another chance came their way. Jensen obliged and Barnsley went 20  15 up with ten minutes left. Heath now had to produce points for all their efforts.

A powerful run from Sheldrake provided the first impetus as he took play into the hosts 22. Play moved to the top side of the park and Heath were well placed for points when they were awarded a scrum just five metres from the Barnsley line. The powerful pack immediately applied the pressure and a good shove saw them drive to the line. A Barnsley infringement stopped a score but only produced another scrum in response. Heath again turned the screw only to see another scrum awarded as Barnsley buckled. This was noted as contrasting with Heaths fortunes at Pontefract, two weeks ago, when they incurred two penalty-tries from the match official  without warning or repeated offence. A couple more re-scrums came and went, until the hosts managed to kick the ball away and clear their line.

Youngster Peter Birkett then entered the fray, for Gary Pidgeon and Heath remained on the attack. With five minutes left, more good work finally saw Hetherington receive the ball and then outflank the defence for an apparent touch-down in the corner. This was just reward for all the visitors efforts and dominance in the tight. Unfortunately, the referee was unsighted, the try not awarded, and play taken back to a previous infringement and Heaths advantage. Ignoring this disappointment and sticking to the task in hand, Heath continued to up the tempo and push for a final score. One more move down the line saw Dom Walsh on hand to collect. A neat sidestep wrong footed the defence and a try (plus hatrick) was his. Unfortunately, the last chance for points in the game was missed as the long kick just drifted wide. A couple of minutes more and Hetherington chipped a penalty into touch to bring the game to an end.

Possibly a fair result, but Heath must rue not turning pressure into points, albeit against reinvigorated opposition. Next week its home versus Bridlington  always a hotly contested encounter. 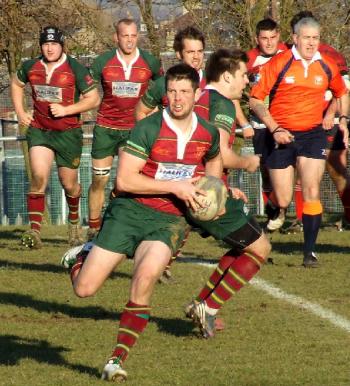 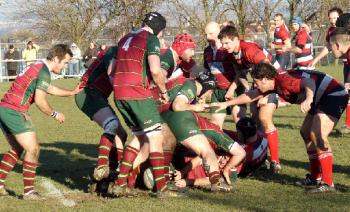 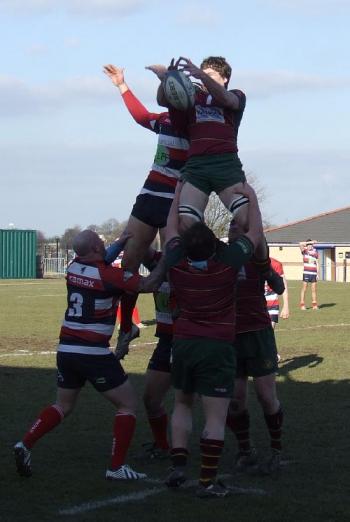 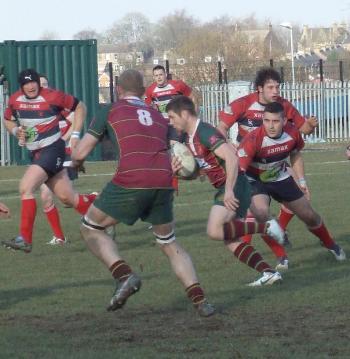 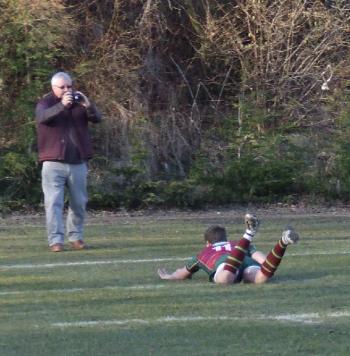 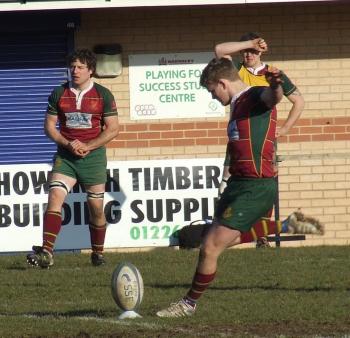 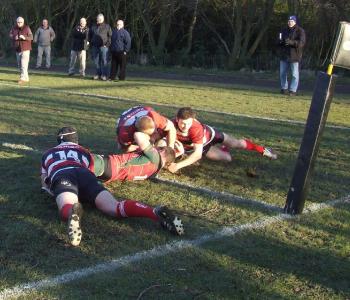 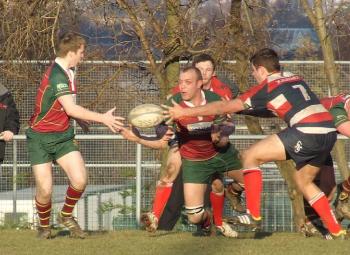 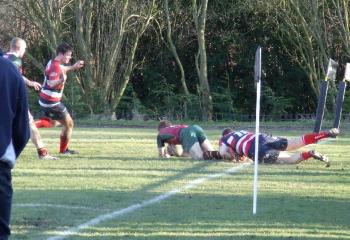 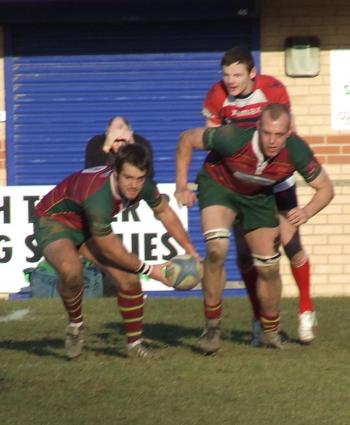 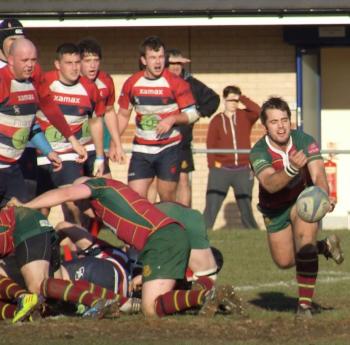 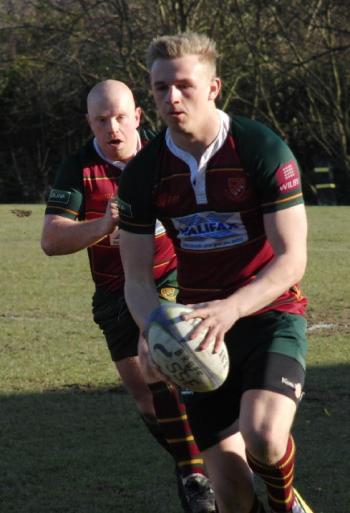 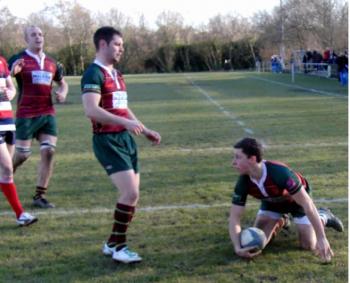 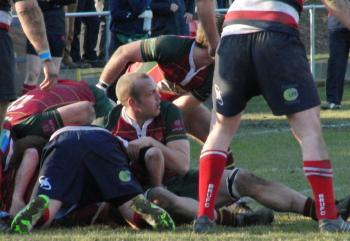 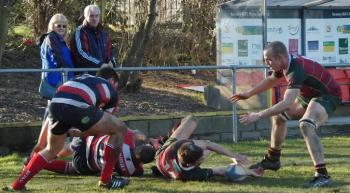