Heath 2nd xv entertained Morley 3rd xv at West Vale in a friendly fixture played on a lovely, sunny afternoon with the welcome return to Heath of ex player, Iain CRAIGON, who now captains the opposition.

After 3 minutes, Heath opened their account when they gained good lineout ball which was passed along the line to centre, Andy WHITE. He made good ground before being tackled. After a couple of good drives, the ball was taken on by second row, Richard DANCE and when he was tackled, it was recycled and given to fellow second rower, Karl RABY, who galloped in from 20 metres. The conversion by Mick GLEESON was unsuccessful. 5  0.

After 7 minutes, the home side increased their lead when they had an attacking lineout on the Morley 22. The line was called crooked and Morley opted for the scrum. Although they won the ball, it was badly kicked away by the outside half; it then dropped straight into Andy WHITEs hands and he made ground before being tackled. The forwards then drove the ball in, on a couple of occasions, to a position some 20 metres out - directly in front of the posts, where scrum half, Dom WALSH, spotted a gap at the side of the ruck, stepped through it and then ran around the full back for an excellent individual try under the posts. The try was converted by Mick GLEESON. 12  0.

After 13 minutes, Heath increased their lead with an excellent try by the backs. From a penalty on halfway, Dom WALSH took a quick tap and after interpassing between Andy WHITE and left winger, Kofi BROBBEY, the ball was passed to Mick GLEESON via Dom WALSH again. He made ground before passing to right winger, Richard ARMSTRONG, who scored near the corner flag. Mick GLEESON converted well. 19  0.

After 21 minutes, Morley won a line out on their own 22 but Heath won turn over ball at the ruck. Richard DANCE fed prop, Jim McCREADY who offloaded in the tackle to fellow prop and skipper, Paddy KERR who made ground before passing to the supporting scrum half, Dom WALSH who scored his second try near the posts. The conversion by Mick GLEESON was successful. 26  0.

After 26 minutes, Heath made a number of changes with flanker, Steve RICHARDSON; outside half, Mick GLEESON; second row, Karl RABY and winger, Kofi BROBBEY leaving the field to be replaced by Chris CULLIMORE, Tom COLLINGE, Barry SYKES and Michael DODD respectively.

Shortly afterwards, Andy WHITE scored a further unconverted try in the corner. 31  0. After 38 minutes, Heath further increased their lead when number 8, Emlyn JAMES had a good run into the Morley half. On being tackled, the ball was offloaded to Richard ARMSTRONG who ran deep into the Morley 22 before passing back inside to flanker, Nick SZADBY, who scored a good try near the corner flag. Young Cookie missed the conversion. 36  0.

From the kick off, the Morley prop took the ball but passed inside without looking and Tom COLLINGE intercepted before sprinting 50 metres for a try in the corner which was well converted by Cookie. 43  0. The half time whistled then followed.

After 45 minutes, Morley opened their account when they were awarded a penalty some 8 metres out from the Heath line. The number 8 took a quick tap and used his strength to power over the line for a try which was converted. 43  7.

Heath kicked off and kept Morley pinned in their own half and after 49 minutes some good passing between centres Cameron RAMSDEN and Andy WHITE led to Richard ARMSTRONG going over in the corner for his second try of the game. The conversion was missed. 48  7.

After 56 minutes, Morley scored a further unconverted try to make the score 48  12 and Heath then took the opportunity to make changes with Richard ARMSTRONG, Nick SZADBY, COOKIE and Emlyn JAMES being replaced by Kofi BROBBEY, Steve RICHARDSON, Mick GLEESON and Karl RABY respectively. Also, Heath were down to 14 men after Andy WHITE was yellow-carded for backchat to the referee, David BROOKSBANK.

Within a couple of minutes, Mick GLEESON took the ball just inside the Morley 22 and ghosted his way through the cover to score a well  taken try midway between the touchline and the posts. He converted the try himself. 55  12.

From the kick off, Mick GLEESON found the supporting Chris CULLIMORE who showed strength and speed to break 30 metres downfield before passing outside where the ball was knocked to ground resulting in a Morley scrum.

When the sinbinning time had concluded, Richard ARMSTRONG returned to the field in the place of Andy WHITE.

After 69 minutes, Heath then scored the try of the game. Morley kicked for touch but Mick GLEESON was able to catch the ball on the full just as it was crossing the touchline. He linked with Cameron RAMSDEN who made ground before passing to Kofi BROBBEY. When he was tackled, he offloaded to Dom WALSH who made further ground before passing to Tom COLLINGE who then returned the favour to young WALSH who finished off an excellent move to score his hat trick try. Conversion missed. 60  12.

Straight from the kick off, Karl RABY caught the ball and made 15 metres before being tackled. The ball was passed out to Cameron RAMSDEN who made 50 metres before passing the ball out, Unfortunately, the ball was dropped and the chance was lost.

This was yet another very good performance by the Heath lads who are building up momentum as the weeks go by. Onwards and upwards!!!

Man of the match awards go to Karl RABY for an excellent display in both attack and defence and centre, Cameron RAMSDEN who put in a very good stint in defence and also in attack where he caught the eye with some excellent breaks. 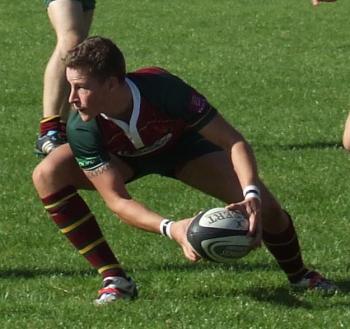