Reported by Sproggit.
<< BACK
FINAL SCORE: Heath RUFC 5 vs Barnsley 22

Heaths new junior Team played their first game this weekend. It was against Barnsley and came about after only six weeks of training, in which Coaches Alf Baxter and Giles Hetherington worked their magic and got the squad well prepared.

For this first encounter the Heath youngsters, looking very smart in their new strip, were straight into the action - going forward and putting together several phases of play. There was some good handling skill evident, along with some fine linking between forwards and backs. But the visitors were tackling really well, keeping attacks at bay and on occasions knocking the Heath lads back.

Soon, the big Barnsley forwards began to control things, looking really strong with ball in hand. This resulted in 2 well taken tries just before half time for them to go into the break 10  0 up.

That said, Barnsley stopped one attack, turned the ball over to kick up field whereupon Heath were penalised for offside. A quick tap was taken and a good try was scored, for the visitors to extend their lead to 17  0.

To their credit, Heath continued to attack and throw the ball about, making some ground but rarely threatening the line. With time running out Barnsley pounced on a home side mistake and scored again, to make it 22 - 0. However, Heath had the last say. With great work from the forwards, driving Barnsley back, live-wire Jack Gibson took the ball and crashed over, out wide, for what was a well deserved and well taken try. Full time score Heath 5 Barnsley 22.

This was a good solid performance from Heath, with lots of determination shown, in the U13s first real encounter with competitive rugby. As more fixtures are obtained, better results will follow.

Keep up the good work lads . 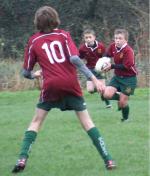