Far better performance than last week, but still a loss.

Heath suffered last minute reshuffles as scrumhalf Charlie Lomas and winger Darren Fermoyle withdrew from the game; Tom Smith coming in for his first game at scrumhalf for Heath and Martin Shaw coming off the bench for Fermoyle.

That aside, Heath kicked off in perfect conditions for a flowing game of rugby, but the visitors collected well and returned the ball with interest. Unfortunately home fullback, Luke Clogher, knocked on and Bridlington were awarded a scrum. They were then penalised and Heath relieved this first pressure and took play to the middle of the park, where it remained for the next ten minutes or so, as both sides jostled for supremacy.

It was the east coast men that broke the stalemate and only a powerful tackle from Heaths number 8, Ian Downsborough, saw the attack halted. Flyhalf Giles Hetherington then kicked stray ball back into Bridlingtons half and some good looping passes in the backs seemed to open up the visitors defence and only a last ditch tackle on the 5 metre line stopped a score.

Heath then maintained this initial pressure and good drives from Downsborough put the visitors on the backfoot until they gave away a penalty. Unfortunately, Tom Smith failed to take the 3 points on offer. But, undeterred, Heath continued their push for the first points of the game though the next surge saw the ball held up over the line. Intent on not coming away without a score, Hetherington attempted a drop, but this was wide of the target and the next play saw Bridlington awarded a pressure-relieving penalty. The visitors took play into Heaths half and when they were awarded penalty, standoff Muru collected the 3 points on offer to go ahead after 25 minutes of play.

This lifted the Brid game and they started to throw the ball around. Stirling defence from centre Martin White nipped the first attack in the bud but the visitors fullback Hall released right wing Burrows on a flying run to pick up 5 points from a well taken try, Muru missing the extras. 8  0 to Bridlington on the half hour.

The restart went badly as Hetherington saw his kick curve back and be adjudged not 10. But Brid failed to capitalise, making matters worse when hooker Lee was binned for dissent. It was then Heaths turn to not capitalise as they missed the ensuing penalty and went on to fail to pick up any points whilst he was off the pitch. This despite a searing break from White, only stopped short by last-ditch defence. Matters were then compounded when, seconds before the halftime whistle, a bouncing ball evaded Heaths winger Shaw, but fell nicely for the visitors winger Burrows, who saw another opportunity and sprinted for a well-taken, but unconverted, try. 15  0 to the visitors at halftime.

The second half started with Brid straight onto the attack, Tom Smith being on hand to stop the first foray. The next five minutes saw both teams trying to kick for territorial advantage and it was the visitors who made the most of it when they collected a penalty and 3 points from the kick courtesy of standoff Muru. 18  0 to Brid.

It was then Heaths chance to make something of themselves and, following a kick and chase by winger Si Brown, the pressure told as Hetherington then did more of the same, leaving backrower Oliver Wilby to touch down, for a Tom Smith converted try. 18  7 ten minutes into the second half and, at last, Heath with some points for all their efforts.

Unfortunately, whilst the visitors redoubled their efforts, the West Vale mens rallies featured mistakes at vital moments. This, coupled to the disruption caused by Heaths Blackmore and Dave Freeman leaving the pitch through injury, saw Bridlington go 25  7 up in short order and then 32  0 on twenty minutes.

Heath didnt give up and centre Martin White was prominent in attack, along with new colleague Rob Clogher, but no more points came their way. Brid on the other hand managed one last score, despite protestations of forward from the crowd, to run out deserved winners at 39  7.

With Selby and Bradford Salem the final two league games of the season, Heath need to regroup the ever diminishing squad and look to their spirit to collect at least 2 more points before Cup Rugby starts. 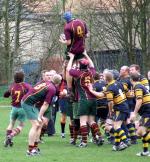