A brilliant day at the seaside.

Heath had a day out at the seaside and put in a heroic effort to come away with the spoils from a mighty battle.

Following a bright start in muddy conditions, Bridlington gradually began to get on top, leaving Heath to defend and work their way into the game. Unfortunately, the West Vale men were first to put a foot wrong and the hosts standoff, Muru, took three points for the lead, after ten minutes.

Not deterred, Heath came straight back when a jinking run from Hetherington set up the position for scrumhalf Ryan Piper to deliver the perfect pass for brother Mick to collect three points from a well taken drop at goal. Three apiece on twelve minutes.

Ten minutes more and sustained pressure from Heath produced a fine piece of play from Ryan Piper, who evaded several tackles and then released Simon Brown who, in turn, passed to Ashley Baxendale for the flying winger to race for the line and a score out wide. The try went unconverted but Heath were now 8  3 in front.

Bridlington were in shock, but Muru continued to dictate pay for the home side and he sent winger Hall in at the corner and then went on to take the two points from the difficult conversion himself. Bridlington now back in front after twenty five minutes of pay at 10  8.

A badly cut eye then saw Danny Nolan come on as a blood bin replacement for Jimmy Blackmore. The tempo remained uninterrupted and the West Vale men seemed to be settling down and providing the better rugby, with Hetherington now dictating play with some astute kicking. A line in the home twenty two followed and a set move saw Eddie Blackmore peel, break through and then go over for an unconverted score much to the apparent annoyance of the home crowd and team alike.

On thirty six minutes Heath were 13 -10 up and a frustrated Bridlington began to move into a more physical style of play, but Heath stood resolute and held firm. As half time approached the West Vale men scored another try, following some excellent play against the now rattled home side. Alistair Gordon forcing his way over the line after good work by Ian Downsborough and Eddie Blackmore. Ryan Piper kicked the conversion for Heath to go into the break with a well-deserved lead of 20  10.

Heath needed to take the sting out of their hosts game at the start of the second half and this they did. Next, Captain Pearce sustained a blow to the face and had to retire with a badly swollen eye. Nolan re-entered the fray as the visitors settled down to an intense period of defence, first in their own twenty two and then with Bridlington camped on their line. Despite the baying of an over-excitable home crowd, a tremendous effort from each and every one of the West Vale men saw Heath soak up attack after attack and then hold out until only around ten minutes of play remained. Then, when centre Jarrod Morris tacked Muru, the Kiwi crashed into one of his own players and both had to leave the field of play, injured.

A long delay followed and from the restart Bridlington continued to press, egged on by the vocal home supporters trying to referee the game by proxy. Eventually, the pressure told and with the rub of the green going their way, one final mêlée broke up over the line for a Bridlington try. This remained unconverted and the hosts were now only one more score behind at 20  15.

The heavy pitch began to take its toll, with the field at times looking like a battleground. Time was ticking away and Heath werent going to take a backwards step. James Blackmore then paid the penalty for a collapsed scrum, being shown a yellow card and spending the remainder of the match off the pitch. Despite now being one man down, Heath held firm as an increasingly frantic Bridlington Team, urged on by their vociferous supporters, desperately tried to close the gap. One last clearance kick failed to make touch and the home side ran the ball back. Tackled short of the line, one final confrontation took place. The Heath forwards were up to the challenge, the final whistle blew and Heath had their well earned moment of glory and two well deserved points from a 20  15 away win.

In a rare Postmatch interview, Kevin Plant said that he felt that this game showed the lads at their best and most determined. The result was never in doubt! 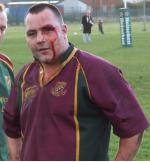 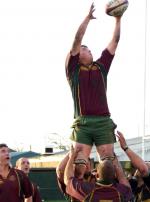