Heath made several changes to their regular line up, with Ashley Baxendale coming on to the wing for Mark Johnson, Jarrod Morris moving to outside centre, the inside centre berth going to the returning Mick Piper and another returnee, Chris Merrick, coming on to the bench. Missing front-rowers meant James Blackmore moving to prop and Oliver Wilby coming back to hooker.

For the first few minutes the big Malton pack took the offensive and the West Vale men were on the back foot, but they survived the storm and returned the compliment when James Blackmore set off on a set move from a lineout. Brother Eddie took it on and set up Mick Piper for a perfectly weighted kick to the corner. The ball didnt roll out and the home side failed to cover safely, the result being that Heath won the ball and followed up with some fine back play, which released Matt Baxendale for the first of his four tries of the afternoon. 0  5 to Heath after only five minutes.

A couple of minutes on and Mick Piper reclaimed the ball from a ruck and put in another intelligent kick down the line. Ashley Baxendale chased through and kicked on, with brother Matt in support. But it was fullback Si Brown who collected in the Malton twenty-two and released secondrow Alistair Gordon to sprint over for a fine score, under the posts. Ryan Piper converted and Heath were 12 point leaders and looking sharper than the afternoons opposition.

Not deterred, Malton kept battling and were rewarded ten minutes later, with three points from a penalty, the Heath defence working so well that tries for the home side didnt look to be an option. The West Vale men immediately countered when Jarrod Morris broke from the halfway line but was pulled up short of the try line, only to release Si Brown who increased the lead to 3  19 after Pipers conversion.

On thirty minutes of play, influential backrower Eddie Blackmore took an injury to his leg and was replaced by Ian Downsborough. Excellent play all round followed, with Mick Piper, James Blackmore, Ryan Piercy and Chris Haigh all making telling runs, before the Piper brothers combined to release Ashley Baxendale for a Piper converted try. Making it 3  26 to Heath with half time approaching.

Malton just couldnt cope with the West Vale mens pace and commitment and, following more flowing and speedy play from Heath, Downsborough powered his way over for another Piper converted try to go into half time 3  33 in front.

From the restart, Olly Wilby gathered and great play with Gordon in support, released Matt Baxendale for a converted try and a 3  40 lead. A weak Malton side really seemed to be struggling and their only option of taking the ball up in the forwards just wasnt the battering ram that theyd hoped for.

Heath continued to play some fine rugby and further entertained their large band of supporters when Downsborough won good lineout ball and quick hands released Matt Baxendale for his hatrick on the hour. Heath were well and truly in control at 3  45, though Malton sneaked an unconverted try to give them 8 from the afternoons efforts.

Coach Plant then rang the changes with Joe Shipman coming on for Gordon followed by Merrick for Ashley Baxendale. Pleasingly, Heath maintained their dominance through to the final whistle with Matt Baxendale sprinting through for his fourth try, a 50 point score and victory for the West Vale men.

This was a powerful team effort from Heath, with all 18 players working together as a unit when on the field of play. They totally outclassed a Malton side that, three years ago, were in North East 2 and this bodes well for next weeks home game against Sheffield. 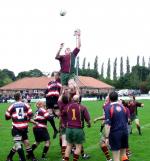