Report:
Heath entertained mid-table Scarborough, looking to maintain their recent form and had a near full strength side despite fitness and sickness worries in the build up to the game. Missing was Eddie Cartwright, holiday, so Olly Scrimshaw had a start with Jason Merrie returning from injury on the bench and Si Brown acting as travelling reserve!

In glorious, sunny conditions and in front of a large crowd the visitors kicked off with Heath playing towards the river end. They dominated the early exchanges and when Paul Turner got hold of the ball in the Scarborough 22 he bounced off several attempted tackles before going over the line for a try, converted by Alex Bull, and Heath led 7-0 with 7 minutes played.

Scarborough were on the back foot and struggling to keep out a rampant Heath side and it came as no surprise to see captain Chris Moore storm over the line for a second converted try 14-0 and 10 minutes on the clock. Next, a strong run from Bull enabled the supporting Ben Stringer to storm over the try-line for a third converted try 21-0 with only 15 minutes  played.

Much to the visitors credit they managed to claw their way back into the game stringing together several phases of play but they came up against a resilient home defence who were in no mood to concede points and after Stringer was replaced by Jason Merrie he had an immediate impact making solid yardage as the ball came out to wing Elliott Spiers who stormed over the try-line for a bonus point score and 26-0.

Next up a super steal from Joe Morrison in the Heath half saw him release Callum Harriott-Brown and the flying wingman flew past the faltering Scarborough defence for a try, converted by Bull, and a score of 33-0 with 30 minutes played. Alex McFadden and Fergus Marsden made way for Jack Pilcher and Seif Boussaada as coach Harry rotated his players  and they were immediately involved in the action. At this point the visitors managed to get a reward for their efforts with an un-converted try in the corner,33-5,but  as the half time whistle sounded, it was all Heath, much to the delight of the sun drenched home crowd.

It was the perfect start for the home side at the start  of the second half as yet another barnstorming run from Jason Merrie enabled the ball to come out to Harriott-Brown to score his second try, converted by Bull, and 40-5 score-line with 42 minutes played. It was complete domination from the home side and two minutes later Merrie scored a try following a drive to the line from the forwards 45-5. Off came Jonny Cole, Chris Moore and Matt Beasty to be replaced by McFadden, Marsden and Stringer as Heath began to pulverise the visitors defence who were completely overwhelmed and after surges from Marsden, Pilcher and Merrie Will McLoughlin was on hand to get on the scoreboard with a converted try 52-5 and 55 minutes played.

Again, to Scarboroughs credit, they kept battling but had no answer to the home team's complete dominance and as Stringer, Merrie and Pillcher steamrolled there way over the visitors defence Dom Walsh was on hand to pick up the ball to score another converted try, 59-5 on the hour mark. Next up, Seif Boussaada got on the score sheet following a run which saw him throw some outrageous dummies as he danced over the line to increase the lead to 66-5. The final try was scored when Scarborough dropped the ball on the half way line. Jason Merrie kicked through and chased after it, scooping up before releasing the supporting Alex Bull who went over the line under the posts for a converted try and a final score of 73-5 with 70 minutes played. Heath continued to batter the visitors defence who were heroic, but battered, and it came as no surprise to see the referee blow for full time much to their relief.

The win sees Heath move ahead of Cleckheaton to sit in the promotion places and, with the final round of games next week, Heath  travel to Pocklington while Cleckheaton go to Durham City it is all to play  for. No doubt there will be an exodus of supporters from North Dean to cheer on the lads, see you there!!!!!!

Carol Herbert, who helps run our website (as Sleepy Frog Designs) came to watch the game this week.  As an accomplished photographer, she caught some great shots from the match.  Here's a link to view them:  click here. 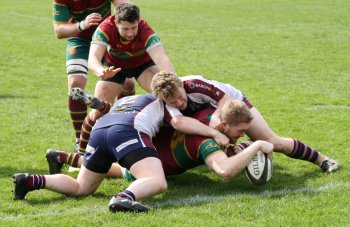 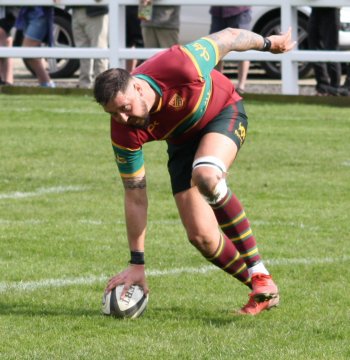 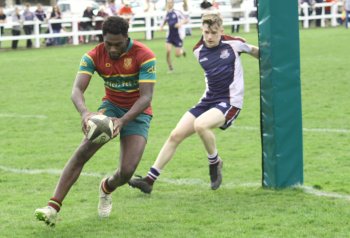 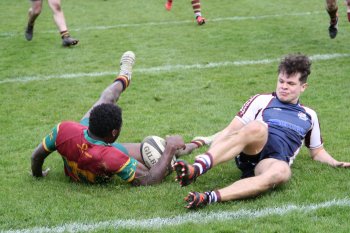 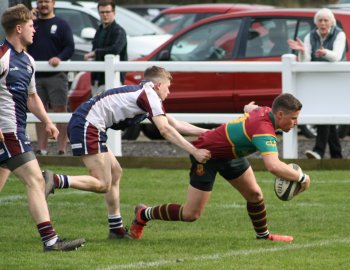 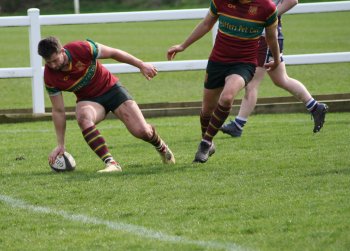 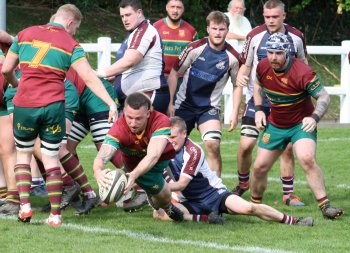 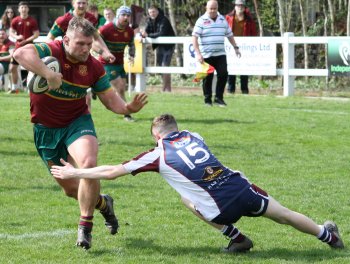 Paul Turner about to score 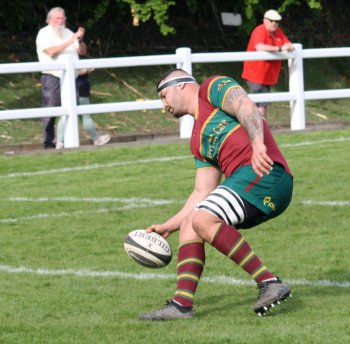 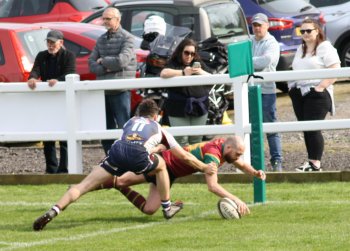 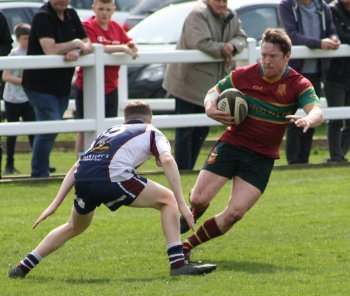 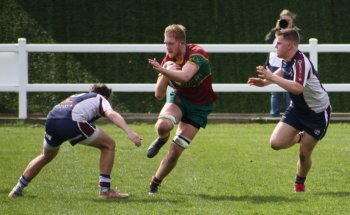 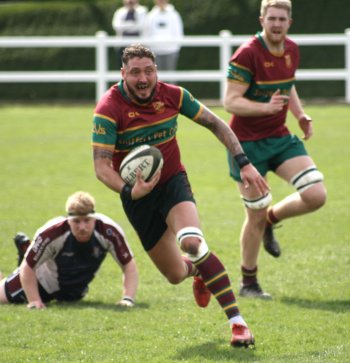 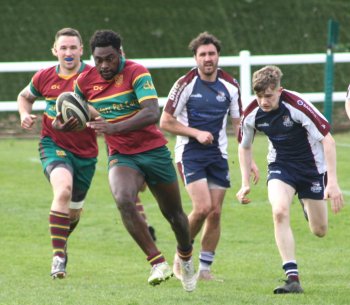 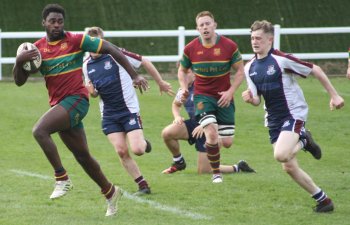 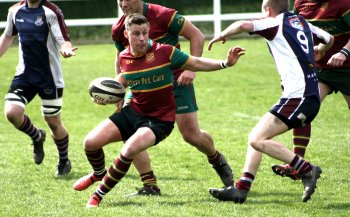 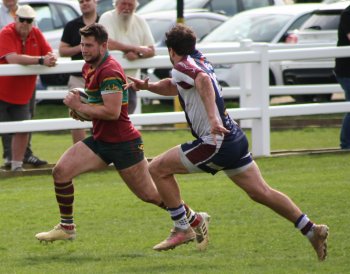 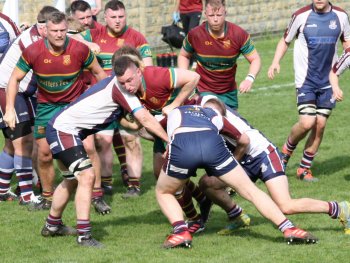 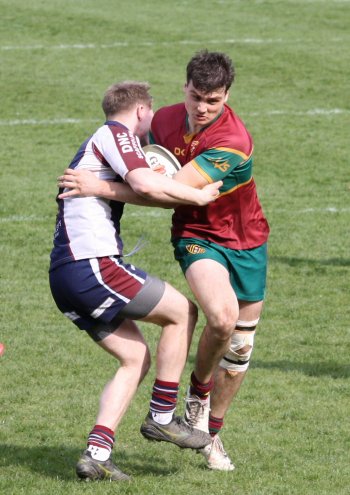 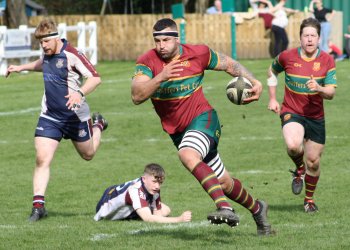 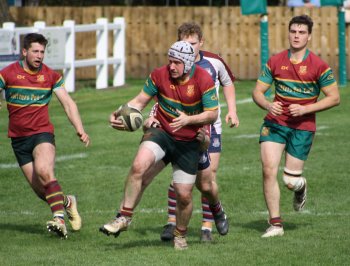 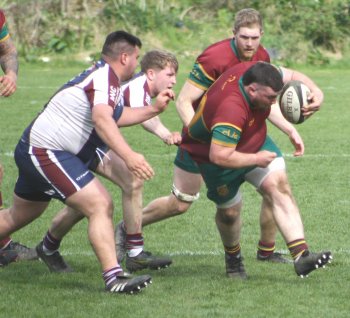 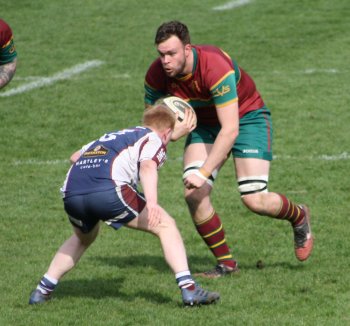 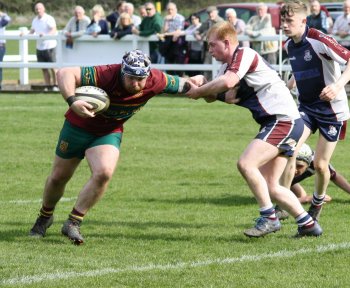