Heath had yet more changes to the side following injuries and unavailability. Matt Hallett, Oliver Scrimshaw and Jonny Cole were missing so there was a return to action for Eddie Cartwright, who replaced Scrimshaw, while Elliott Spiers moved to full back, replacing Hallett, and there was a starting berth for Harry Woollard on the wing. Joe Shipman came in for Cole and Olly Cook had a start with Paul Turner taking a stint on the bench alongside Saif Boussadda and Luke Saltonstall.

The ground was saturated following heavy overnight rain but thanks to the volunteers who swept and forked the pitch prior to the game and with the agreement of both captains and the referee the match went ahead. Rain was still pouring down as both teams took to the pitch and there were several areas of standing water as Bradford and Bingley kicked off playing towards the river end. It was obvious to the crowd, who were huddled into the stand or protecting themselves under umbrellas, that the game would be littered with mistakes and with players dropping the ball the game stuttered into action.

The visitors took the lead after 7 minutes with a penalty conversion, 3-0, but this was short lived as Heath began to click into action. Chris Moore and Jack Pilcher were prominent in gaining yardage before Pilcher released Fergus Marsden who stormed towards the try-line and when a Bees player was yellow carded Heath turned the screw. The home scrum was dominating play and when Ben Stringer broke from one he went over for a simple try, converted by  Eddie Cartwright, and Heath led 7-3 with 15 minutes played. Unfazed, the visitors went in search of another score but when Dom Walsh released Elliott Spiers in the Heath 22 the full back set off on a run, evading several tackles, to score a second converted try and a score of 14-3 with 25 minutes on the clock. Heath were now taking charge and with Bees on the back foot and Heath keeping possession of the ball it came as no surprise to see Harry Woollard go over for a third try to increase their lead,19-3.

Time for change as Paul Turner and Saif Boussadda replaced Olly Cook and Fegus Marsden on the half hour. Conditions began to worsen and credit must go to both sides who tried to keep the game flowing. Heath continued to keep the pressure on and were rewarded when captain Chris Moore scored a try in the corner on the stroke of half time. Bonus point in the bag and a lead of 24-3 fully deserved.

Heath began the second half where they had left off with Ben Stringer making a good run before releasing the supporting Dom Walsh who looked to have scored a try but was pulled up for a double movement, penalty Bees. Marsden returned to the action as Matt Beasty left the field with an injury as Heath continued to bombard the visitors' defence and with Boussadda, McLaughlin and Turner making inroads into the Bees line the ball came out to Harry Woollard who jinked over for his second try on 50 minutes to increase the lead to 29-3.

Tom Owen made way for Luke Saltonstall and Olly Cook returned when Chris Moore took a break as Heath maintained the pressure. The visitors were feeling the brunt of the onslaught and had to go to uncontested scrums but they had no answer as they conceded a sixth try. Dom Walsh, who was in full control of th game, put in another super kick to find touch in the corner. From the line out, Heath won the ball and, as they drove towards the line, Jack Pilcher was on hand to score the try, converted again by Eddie Cartwright, and a lead of 36-3 with 75 minutes played.

From the re-start, Walsh put in a super kick for the touchline and then from the throw Pilcher went close. Next the ball came out Woollard, he linked up with Joe Morrison and when Callum Harriot-Brown received the ball he selflessly opted for the pass to Saltonstall when, perhaps, he should have rounded off  the move himself.  The try was missed. However, Heath did score a seventh try when Jack Pilcher went in for his second try, converted by Cartwright and a final score of 43-3 was fully deserved.

The game was not a classic, the weather put paid to that, but credit must go to both sides who tried to entertain the crowd in atrocious conditions and to Bradford and Bingley, who although winless, never threw the towel in and battled to the end.

Maximum points leaves Heath in third spot, following wins for Driffield and Old Brodleians, as they prepare for a visit to Morley next week which marks the half-way point of the season. Will settle for that!!!!!! 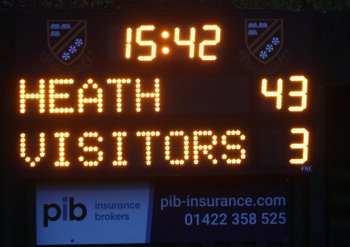 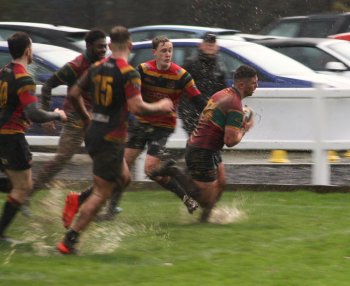 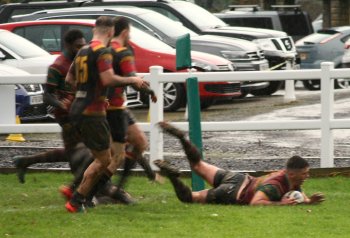 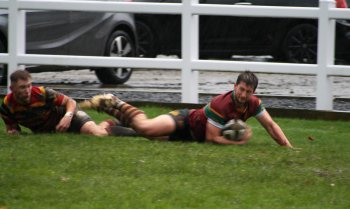 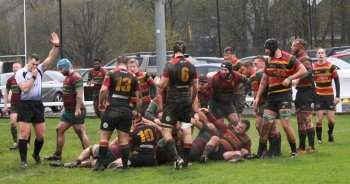 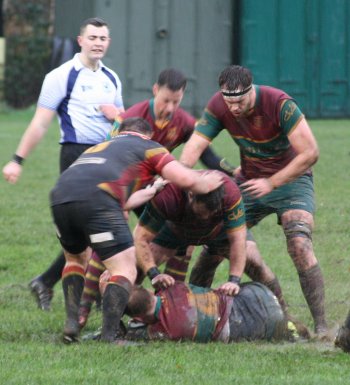 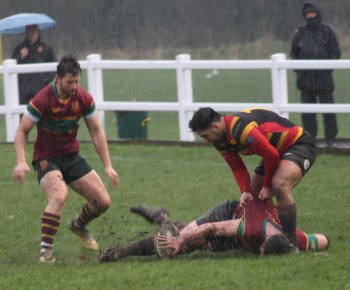 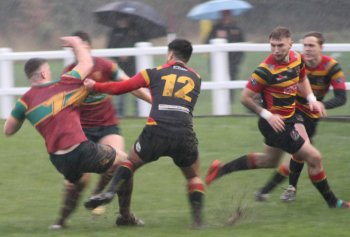 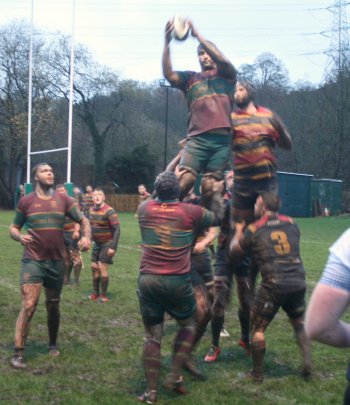