Heath travelled over to the east coast in buoyant mood following their opening day win against Pocklington but the side showed several changes due to injuries and unavailability. The pack saw the return of captain Chris Moore, Paul Turner and Gavin Rhodes replacing Jack Pilcher work commitments and Saif Boussadda injury with Olly Cook taking a turn on the bench. In the backs Dan Cole replaced Olly Scrimshaw, who was also on the bench, and Matt Hallett had a deserved starting position with Tom Owen unavailable. Also on the bench was Joe Shipman.

The pitch at Scarborough looked in pristine condition and weather conditions were favourable with a wind blowing across the field. Heath began in confident mood with Ben Stringer prominent with a couple of strong runs making good yardage. Next up Elliott Spiers had a fine run to the corner as Scarborough were struggling to adapt to the pace of  the game and following two scrums won by Heaths powerful pack it came as no surprise to see Will McLoughlin go over for a  try to open Heaths account,5-0 with 10 minutes played. This seemed to spur the home side into action and they began to put some passes together and with some astute kicking it was Heaths turn to feel the pressure. The home side reduced the arrears with a penalty after 20 minutes, 5-3 and with Heaths line outs not working and with a lack of ball, Scarborough began to put more pressure on the visitors defence. However, with 25 minutes played, Dan Cole put in a super kick finding touch 10 metres from the home try-line to see Heath mount an attack. Matt Beasty claimed the ball and charges from Gavin Rhodes and Chris Moore set up the next phase of play. It was Scarboroughs turn to deal with the pressure and Heath to take advantage. Dom Walsh got the ball out to Callum Harriott-Brown who then slipped it inside to Eddie Cartwright who in turn released a supporting Matt Hallett who went over for a try in the corner to round off a superb move. A missed conversion but Heath were back in control 10-3 on the half hour mark. Unfortunately, from the re-start Heath were not concentrating gifting the ball to the hosts and they scored a simple try in the corner to reduce the arrears 10-8. Heath needed to cut out the mistakes from re-starts and get back to playing good rugby and when Joe Morrison went on a super jinking run he set up a Heath attack. The supporting Dan Cole fed Gavin Rhodes and he proved unstoppable as the second row went over for Heaths third try, again a missed conversion, but a lead of 15-8 as half time approached was well deserved.

Olly Cook replaced Paul Turner at the start of the second half and he was quickly involved making a strong run to set up a Heath attack.  An unfortunate injury to Gavin Rhodes on 50 minutes saw Joe Shipman enter the field and as the visitors re-adjusted Scarborough took advantage and following several missed tackles from Heath the home side scored a converted try to draw the scores level 15-15 with 50 minutes played. The game now became a real contest as both sides looked to score and when Dan Cole slotted over a penalty after 64 minutes,18-15 it looked as if Heath may just about hold on. With players struggling with cramp and injury both teams made changes and fresh legs were required. Chris Moore was replaced by Paul Turner and Olly Scrimshaw came on for Matt Beasty, but with 10 minutes remaining Scarborough levelled the scores with a penalty,18-18. At this point coach Harrison began to make further changes as Chris Moore returned with Olly Cook going off and Gavin Rhodes came on for Will McLoughlin. With some of the Scarborough players looking very tired Heaths fitness levels began to kick in and when Ben Stringer charged forwards he was hauled down by a desperate home defence but a supporting Elliott Spiers managed to get hold of the ball and touchdown in the corner, converted by Dan Cole, and a score of 25-18 was fully justified for Heath.  Scarborough were out of the game and from the re-start Heath managed to retain ball and wind down the clock for an excellent away day win.

Although the game was littered by mistakes it was yet another epic battle from two very good sides. North 1 East is proving very enjoyable for Heath with two wins from two and they sit proudly in third spot in the league. Next week Heath entertain Malton and Norton and it is well worth a visit to watch some exciting and entertaining rugby.

Scarborough's Coach, Matty Jones, interview after the game.  Link here.  (You are about to navigate away from the Heath RUFC website. Heath RUFC is not responsible for the content of this external site and does not monitor other Web sites for accuracy.)

Photos - sorry, only 3 this week as Garf's transport broke down 29 miles short of the ground and rescue didn't arrive till well after the game had ended! Shots included are courtesy of Kay's phone. 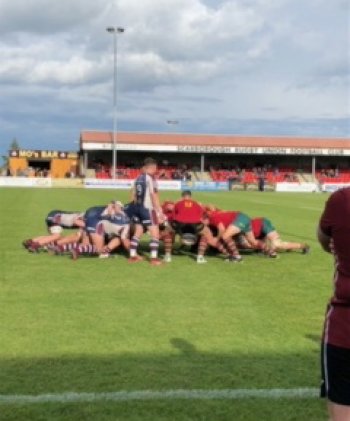 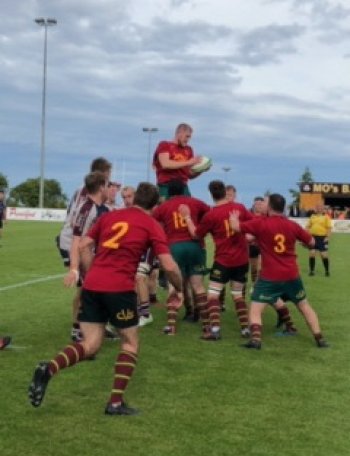 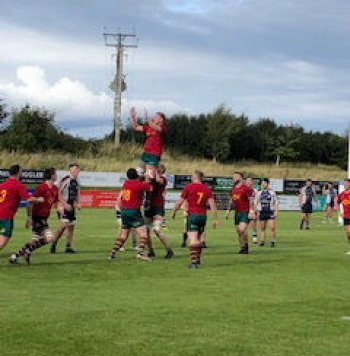