This victory sums up how far this impressive squad has come

Heath travelled to Bees with a depleted squad against a notoriously strong side on their own patch. The away team played the first half against the strong wind and set out to keep the ball tight and in hand. The game was even with Heath dominant in the scrum and powerhouse enforcers Craig Morley, Richard Dance and Emlyn James driving well. Centres Jack Bruce and Danny Greenwood were running good lines and getting Heath on the front foot. Bees took the lead after a couple of mistakes in midfield, eventually crashing over from close range for an unconverted try. They followed it up when their fullback brushed past some week tackles to score unopposed under the posts for a 12-0 lead. Heath, undeterred continued to play and impressively retain possession, Greenwood ran hard onto a Richard Cole pass and scored from twenty metres out, Cole hitting the post in difficult conditions. It got better as Adam Milner, man of the match Brook Ward, and Matthew Wilkinson broke the line and linked with the backs. The impressive Jack Raby and returning Tom Cockroft exchanged passes with the latter arcing round the last man to score. Right on half time Michael Reynolds attacked from a reset five metre scrum and beat the cover to score. Half time 12-15, Oli Burbidge replaced Milner.

With the elements in Heath's favour the team were confident of victory. Cole and Reynolds kicked intelligently and made Bees play from deep. Tobias Hinchliffe and Wilkinson were superb in defence when chasing kicks. However, the vital score eluded the visitors and strong defence was required by James Whitworth, Max Dawes and Bruce. Bees were clinging on, Reynolds was deemed to have bounced the ball as he went over with Burbidge and Dance held up. Milner returned for James and Cockroft was unlucky not to score. From an attack in Bees 22 Heath attacked the blindside, the defence shot out Cole dropped the ball into his foot and rolled it over the tryline with Bruce winning the race to score the bonus point try. Cole converted from wide out for a ten point lead. From the kick off Heath invited pressure with mistakes and Reynolds unlucky to see his long clearance roll dead. From this position the Bees prop broke the line to score an unconverted try. With ten minutes left Cole missed a long distance penalty attempt but was on target shortly afterwards to increase the lead to eight. Heath saw out the game for a deserved win.

This victory summed up how far this impressive squad has come. After a tough start they stuck together and dominated a very competitive Bees side. Well done to all involved 😉 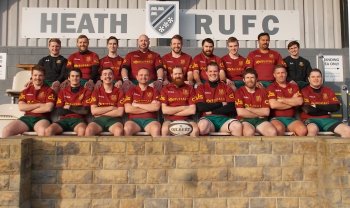