Heath started brightly and attacked well.  Centre Sam Gill carried hard and caused problems in the Bees defence. Oliver Burbidge had to leave the field with Chris Beever coming on in the centre and Danny Greenwood joining the pack.

Heath opened the scoring when backs and forwards combined for Luke Saltonstall to score by the side of the posts, prop Richard Cole converted for a deserved lead.

Against the run of play and after a number of needless penalties against Heath, Bees scrambled over the line for an unconverted try. Heath had a number of chances in the backs to increase he lead, managing to drop the ball with the line open. Gill left the field with  gash above his left eye after clashing with Greenwoods knee, replaced by Tom Cockroft. Bees Tongan duo at 8 and 12 were proving a handful and causing damage when they carried. Heath struggled to gain and keep possession but their defence was superb, lead by the returning Matthew Hallett.  A rare visit into the 22 saw Richard Dance carry a number of defenders over to score a converted try.

Heath ended the half defending their line and Junaid Malik, George Heron and Dance put in some massive hits to stop what looked like certain tries.

Heath kicked off with a positive team talk ringing in their ears. Michael Reynolds dummied and scored from close range, Cole added a simple conversion. To continue the dominance a loose kick was collected by the impressive Saltonstall who beat several defenders, leaving them in his wake from 40 metres out for a superb try. Cole, clearly jaded from uncontested scrums sliced his conversion.

A number of penalties and poor decisions let Bees back in the game with two quick fire tries reducing the lead to 9 points, this was topped off with Greenwood sin binned for an offside team offence. Back rowers Max Dawes, Joe Shipman and Brook Ward tackled superbly and harassed all game. On one such occasion Reynolds followed up a poor pass at a lineout, gained possession and sprinted clear to score from well inside his own half.

The game was open at this point and Bees broke clear on a number of occasions only for Cockroft to defend superbly. Malik rolled back the years with some incisive runs, backed up well by Beever. Young winger Jack Thornton was unlucky after making a break, he put just too much on a kick over the last man. Frustration lead to Bees number 8 being sin binned. Heath played in the right areas of the field and were rewarded when Saltonstall picked from a ruck to complete his hatrick. Spoiling this by joining their 12 in the sin bin for a falling out after the try was awarded.

Reynolds collected the kick off and cleared to end the game.

This was a fantastic performance and the defence was superb when under pressure. Reynolds, Saltonstall and Dance were standouts in an excellent team performance. 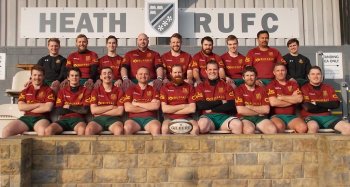