Excellent conditions greeted Heath and their South Yorkshire opponents in what would be Heaths last fixture of the season.

It what was a heavily whistled, stop/start affair Heath found it hard to string together any continuity of play with the number of restarts not allowing Heaths backs to fully put on display what they have been doing over the season.

It was all Rotherham in the first half and it took until the stroke of half time for Heath to get points on the board.Andrew Coates breaking the tackle in midfield, putting through a chip kick to chase only to be tackled off the ball allowing the supporting Harry Stevens to pick up the loose ball and score under the posts.Heath trailed at the break 7-26.

Heath were first to score on the second half with this time Harry Stevens putting the grubber kick through for Centre Alfie Connors to just beat him to the score with only two second half minutes on the clock.

From there it was all the visitors extending their lead to 52-12 by the 78 minute mark at which time a touchline fracas saw two Red cards for Heath, one each for Alfie Connors and harshly for No. 8 Isaac Shaw, along with one red card for the visitors.

Men of the match were Max Rowntree for the backs and Andrew Coates for the forwards. 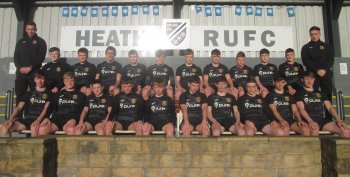