Heath made the short journey over the tops to take on Keighley in a Friday night game under lights on the astro-turf in search of a performance that would secure their rightful place in the play-off position. Coach Harry made several changes to the side with Eddie Cartwright replacing the injured Ezra  Hinchliffe at centre and Jack Crabtree came off the bench to slot in  at full back. In the pack Dave Skinner started at prop, Alex Patrick moved to second row in place of Fergus Marsden, Jonny Cole came in at 6 and Jordan Moana returned at 8. On the bench was Chris Piper, Richard Brown and Chris Robinson.

The ground was buzzing in anticipation and conditions were excellent as both teams entered the field. Heath began the game with a deep kick which was quickly returned by the home side. A couple of penalties were exchanged before Heath mounted a first attack when Jason Merrie went on a run. He released Callum Harriett-Brown who drove towards the line and his off-load to the supporting Luke Saltonstall saw the wingman go over in the corner to open Heaths account, 5-0 with 5 minutes played. From the restart Heath mounted another attack following good work from Jack Crabtree but the home side started to keep hold of the ball and began to test the Heath defence. However, the home side could not find a way through and the visitors began to take control. Michael Reynolds  was beavering away in his usual game and following good work he was un-ceremoniously dumped into the ground after releasing the ball which required a stern warning from the referee as Keighley became frustrated. This inspired Heath and from the resulting penalty Dan Cole found touch. Heath line out saw Matt Beasty catch and on landing the forwards drove towards the home try-line and Jordan Moana wa son hand to score a second try, 10-0 and 25 minutes played. Luke Saltonstall was injured and so Chris Robinson entered the fray as Heath were again gathering momentum. Moana was having a major effect on the game with his charging runs and when he passed to Dan Cole the ball then came out to Eddie Cartwright  who went in for Heaths third try on 28 minutes and Heath were in control, 15-0. Chris Piper entered the field replacing Dave Skinner as Heath continued to  battter the home defence. Jack Crabtree was once again prominent in Heaths next score when he sent out a long pass to Cartwright which cut open the Keighley defence. The centre then slipped the ball to Harriett-Brown who sprinted for the corner before releasing Issy Spooner who went in under the posts for the bonus point try. Cole converted and a score of 22-0. As half time approached Keighley scored a converted try to reduce the arrears 22-7 as half time arrived but it had been Heaths half and the supporters were baying for more of the same.

The second half began with a bang for Heath when Jordan Moana, Alex Patrick and Jonny Cole created an opening for Michael Reynolds to go over for a converted try, 29-7. There was no stopping Heath as they threw the ball around the pitch pulling the home side all over the place. Moana was replaced by Richard Brown and as Dan Cole was instrumental in setting up wave after wave of attacks with the home side struggling Richard Brown scored yet another try, converted by Cole, 36-7 with 48 minutes played. Dave Skinner came on for Chris Moore at the re-start and as Keighley kicked the ball down Dan Coles throat he set off at speed throwing some outrageous dummies running 70 metres to go under the posts for a converted try, 43-7, with 50 minutes played. Keighley were a spent force and next up for Heath was a try from Alex Patrick on 56 minutes, 48-7. Michael Reynolds was replaced by Moana as Harry shuffled the side around but an injury to Jason Merrie shortly afterwards saw Chris Moore back in play. Heath were in total control and when Crabtree put up a high kick Cartwright caught the ball and off loaded to the supporting Chris Robinson who went over for yet another score on 65 minutes, 53-7. Heath continued to excel as stand in captain Alex McFadden urged his players forwards for yet more tries. Richard Brown went on a run and released Matt Beasty who was on the wing but he was bundled into touch but it came as no surprise to the Heath following when from a scrum the ball was thrown along the back line and Callum Harriett-Brown scored Heaths tenth try of the game on 70 minutes 58-7. Despite the score to Keighleys credit they kept battling away and with the final play of the game scored an unconverted try for a final score of 58-12 but this did not take away from Heath one of the best performances of the season.

Next week it’s the final game of the season at home to Middlesbrough and then the BIG  one with a play-off game at  the end of the month.

Apologies for the lack of photos. Floodlit game difficult for any decent shots. 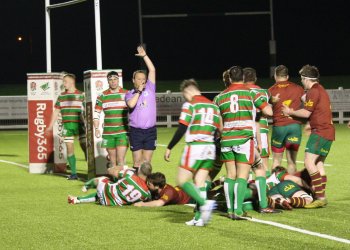 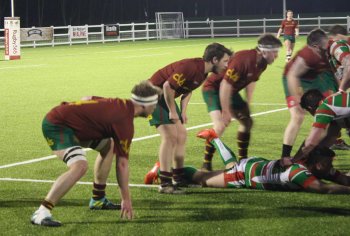 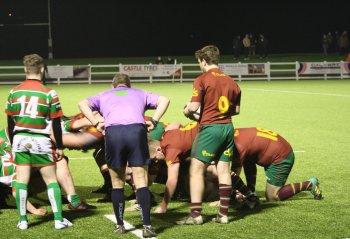 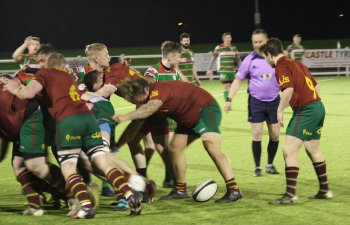 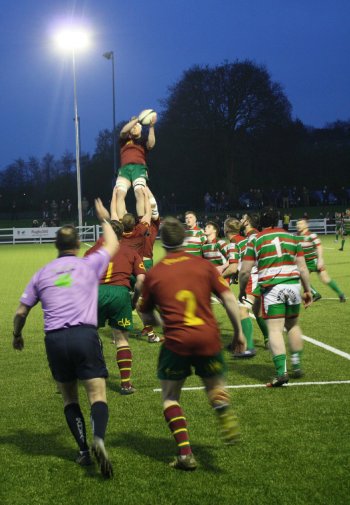 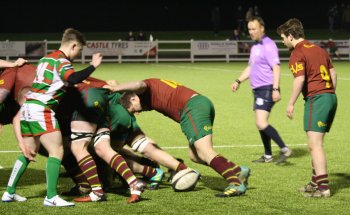