After a run of defeats, some heavy , Heath travelled to a Bingley side who had recently had notable victories over the sides that had beaten Heath.  Confidence had taken a hit , and with the poor weather conditions the team took to the field with a strong side on paper, looking to get back to winning ways.

With Bingley allocating one of their outlying pitches, conditions were not going to be easy for players, a large home crowd and the visiting supporter.

Heath started strongly, great work through the forwards,  piled early pressure on a Bingley team who I think were already expecting a victory . Rucks and drives were dominated by the powerful Heath pack , with Piper and Dance have early drives. With field position gained through excellent kicking from Cole, the first of many set piece scrums, saw Bees in heavy reverse, winning a penalty . The home team also started to voice their opinions a little too much to the official, seeing them marched back the extra metres. With another try on 5m Heath drove and Reynolds snatched the ball from the base of the scrum and crossed the line the opening score. The difficult conversion was missed 0-5

Bees cam back strongly , with their lively No8 causing some concern in the Heath pack , releasing their nimble backs they broke the line several times only to be repelled by great tracking back and tackles form Cockroft, Ramsden and Hinchcliffe. Heath were trying to set a platform to counter attack, Beever had a great run curtailed, after collecting a long clearance. Bees seemed to have learnt from their earlier indiscretions and it was now Heaths turn to concede several penalties to give them field position . They were held up over the line from one attack , Puttick struck against the head from the scrum and the ensuing drive forced a penalty allowing Cole to kick clear. Attack after attacked was repelled , with Wilkinson and Dawes executing excellent defending tackles, James and Milner were also counter rucking when they could. Shortly before half time , Piper saw Yellow for an apparent swinging arm tackle. Heath rejigged the pack and still managed to hold the scrum.  When the ball was released wide , the ball was recycled several times by Bees and they won a penalty on 5m for failing to roll, an offence that was deemed serious enough for Puttick to also join Piper on the side lines. Although the squad held firm for 5 minutes , Bees eventually formed a driving maul and drove over to level the scores. Shortly after Half Time was blown

Bees mantra for the start of the 2nd Half was to make the most of the 3 minutes until Heath returned to 14. This they did with aplomb and Heath were under the cosh for most of this period, however Heath held out and Hammond took the field for Piper.  With parity fast approaching Bees tried to press for another score but the team held strong. Puttick was called back on and numbers were even again , and soon found himself out wide executing a great kick any fly half would have been proud of. Bees however were gaining in confidence cheered on by their supporters a neat mismove in the centres , wrong footed Wilkinson seeing their back cross under the posts for a well worked try, the extras were a formality

Heath did not give up , the scrum proving particularly fruitful, several drives saw Ward controlling the ball to gain valuable yards, Hinchcliffe nearly got around the back of the line , but was forced into touch on another great run . James was felled with a head injury, when defending valiantly and Whitworth came on as replacement. Several further opposition attacks were  overturned by a team that were fighting for each other. From another great scrum there was Reynolds again to cross for his second score of the match , with the conversion also missed.

Greenwood came on for  Wilkinson and Hammond was replaced by Piper.  Heath were looking for the winning score with the clock running down, however another penalty conceded in centre field saw Bees elect to take the points and potentially win the game with only minutes left.

Heath piled on pressure and Bees started to crack again, seeing one of their own players in the bin for back chat.  Heath pressed through the forwards , knowing that even a try would need to be in a kickable position .  With time nearly up they found themselves awarded a scrum 5m out, on the first drive with a penalty already awarded, the ball was not grounded. With Heath electing to take the scrum again , a huge push saw the Bees pack fall apart and then go to ground. The official pointed to the posts awarding a penalty try , and then blowing for time to great scenes of celebration from an exhausted team

What a great show of teamwork on display here, even when we went down to 13 men , everyone to a man stood up and put their bodies on the line , and I am sure there are a few aching bodies this morning . With a set of replacements also more than contributing when needed including vocal encouragement in the final minutes. We move on to YMCA next week, if we can keep the team largely the same, we can enjoy a better 2nd half of the season 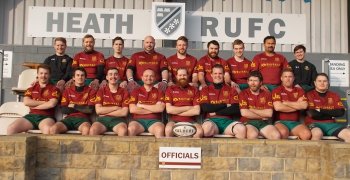